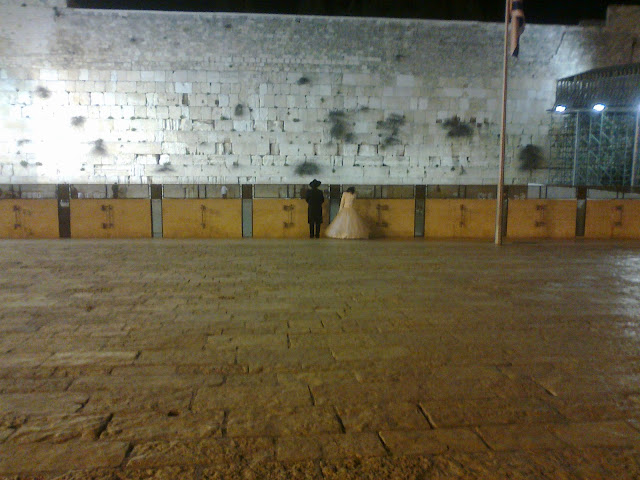 Rav Al,
This is a beautiful post. I have been to the kotel late at night and I really sympathize with everything said here!

Fantastic post; really brings me back to my year in Israel. I very strongly remember my not-all-that inspiring experiences at the kotel. Thanks for this different take!

I love this blog! I live right by the Kotel and find the middle of the night the most meaningul time to go. I think it's interesting to go during the day, surrounded by our diverse community, and return at night. Both are very special, very different experiences!

I appreciate most of this post very much, but I object to stereotyping and pigeonholing people as "secular" or "religious", especially based on what they wear. I think it is wrong to judge a person's connection to the sacred based on whether she wears jeans or skirts, or whether he wears a kippah or not.

Stefanie.
I wasn't attempting to justify or recommend the practice. I was merely recording the fletting thoughts that passed through my mind.
Possibly, I have instincts that tend to initially label people based on appearance. But in truth, I do think that most of us do it. Our brains try to assess people by the way they act and dress so that we can know how to interact with them: Is she Israeli or American? Religious? Haredi? Secular? Is that person a tourist, a native?
I was trying to say that at this late hour, the Wall and everyone there seemed (happily) to be quite oblivious to all our varying shades and stripes, our uniforms and our labels.
You are 100% correct that we are wrong to judge one another. Someone can look religious and be a disgusting individual - far from religious. A secular looking person may be a true Tzaddik.
Hope I have clarified that a little.

Rav Israel,
I was sitting here at work with not much going on so I decided to read your blog and I was really moved by this post. I remember that special night at the kotel as one of the most powerful moments I had in my year in Israel. Reading this really makes me miss Israel and especially yeshiva. I hope all is well and thanks again for the weekly parsha shiurs you send me.

David.
Hope that you are well. We're missing you at Yeshiva this year! Thanks for adding a comment. Stay in touch!