On the Street #1 - A secular learning party 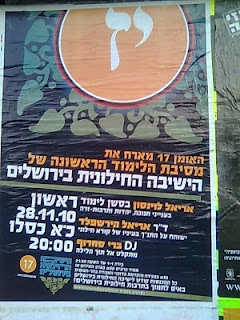 This poster caught my eye as I walked through Jerusalem this week.

It is an event on Sunday evening , a "learning party," run by "The Secular Yeshiva in Jerusalem." The big יז at the top of the poster represents the number 17, because the evening will take place at Jerusalem's leading nightclub and party venue, HaOman 17!

What is on the bill for the evening?

- A "session limmud" on Channuka: Judaism and foreign culture

- A talk by Dr. Ariel Hirschfeld "The Tanakh in the eyes of the secular reader"

- and then DJ Barry Saharoff will lead the rave into the night.

One should note how the poster (uncharacteristically for a secular crowd,) has the Hebrew date prominently displayed. Oh ... and all proceeds are "kodesh" to the Secular Yeshiva of Jerusalem.

The secular Yeshiva first opened in Tel Aviv (link) and apparently there is now one in Jerusalem. It represents a wider reconnection between elements who define themselves as ideological, zionist and secular to rediscover and reconnect with their Judaism (see here and here.)

I LOVE this type of engagement between Judaism and the young "secular" crowd. It is vibrant, contemporary, and shows a genuine thirst on the part of young Israelis to revitalise the relationship with their Jewish heritage.

An encounter at the mall: "I would really like to study Tefilla!"

I went to buy a coffee at Kanyon Hadar at lunchtime today. As usual, the security guard, a sweet Ethiopian man with a small knitted kippa, stopped me to check my bag. He ruffled through the contents, mainly sifrei kodesh. So I said to him:

To which he replied:

I was unsure that I had heard him correctly, so I asked him what he had said.

"Tefilla, y'know - like the Tefillot of Shabbat. I'd love to understand them better."

He then told me that he'd love to get to a shiur but he also has an evening job, and he gets home too exhausted in the evenings.

Well, this encounter just put a big smile of my face. It's amazing how the security guard who you see every day is just such a special soul. We must never forget to value every person. And I was just filled with the feeling of how wonderful it is to live amongst our people, and just what incredible people we have.
Posted by Alex Israel at 12:42 am 0 comments

Bike Riding, Juvenile Offenders and the Land of Israel

Some questions for the parsha. Please feel free to add answers in the comments section.

We all know the story. Yaakov prepares for his encounter with Esav by means of "prayer, war preparations, and gifts." (see Rashi 32:9)

And the messengers returned to Jacob, saying: 'We came to thy brother Esau, and moreover he cometh to meet thee, and four hundred men with him.' 8 Then Jacob was greatly afraid and was distressed. And he divided the people that was with him, and the flocks, and the herds, and the camels, into two camps. 9 And he said: 'If Esau come to the one camp, and smite it, then the camp which is left shall escape.' (32:7-9)

· How does this "splitting" or "halving" the people help Yaakov? He says that if one camp is killed, then the other will escape. But, how does Yaakov know in which camp to place himself? How is he sure that he will be in the camp that will get away? And what is to say that Esav will not hunt down the second camp?

· Interestingly, the Rashbam suggests (see 32:23) that when Yaakov gets up in the middle of the night and crosses his family over the river, he is escaping to avoid a confrontation with Esav. Is this the "two camp" thing? Yaakov leaves everyone else in the camp, and runs off with his family!

· And then the mysterious angel fights with him all night. He emerges bruised and limping in the morning and is immediately confronted unawares by Esav:

"And Jacob lifted up his eyes and looked, and, behold, Esau came, and with him four hundred men. And he divided the children unto Leah, and unto Rachel, and unto the two handmaids. (33:1)"

· One further point here regarding the splitting into "two camps." Halving the camps would appear top be a bad thing… due to Esav's impending attack and bloodbath ("women and children" - 32:10) Yaakov divides his camp into two as an act of defense. And yet, in his prayer (32:11) Yaakov expresses God's extensive kindness –chesed – in that "now I have become two camps," as if it were a good thing! (And see the end of last week's parasha - מחניים) So... two camps – good or bad?
Posted by Alex Israel at 10:28 pm 0 comments

Email ThisBlogThis!Share to TwitterShare to FacebookShare to Pinterest
Labels: parsha

Our parsha opens with Yaakov's travels to Haran. For the reader of peshat, the notable event interrupting his journey is the dream at Beit-El, otherwise his journey would seem smooth and relatively uneventful. But Rashi, suggests a rather that his journey to Haran was extended by 14 years:

In other words, Yaakov had spent 14 years in the "House of Ever" learning Torah. Rashi is drawing upon a Midrashic tradition that there was a Yeshivat שם ועבר, an institution in which the Avot (and, it would seem, their contemporaries) would study "Torah."[1]
And this is fascinating. What did they study in Yeshivat Shem V'Ever? Why does Yaakov need to spend 14 years there? - After all, did he not have the best education at home? He would have studied with Avraham and Yitzchak!

Let us articulate a few reflections upon this Midrashic tradition:
Of course, homiletically, the Midrash seeks to view the Avot engaged in a classic religious act – sitting in the Beit Hamidrash over a Gemara and learning Rashi and Tosefot! However if we can be less literal about this Midrash, we may suggest the following.
1. Even if a person has a solid religious tradition from home, as a young person seeks to build his own independent life (Yaakov is leaving home and setting up his own family) he needs to develop an independent, personal religious direction. And that involves seeking other teachers, alternative spiritual models. We can build upon our parents' Judaism but it isn't sufficient. We need to move away, to reexamine and to reconstruct our own personal Judaism on our terms. This needs to be done by studying and experiencing fresh and different religious environments.

2. It is fascinating that there seems to be a Torah of the Avot, and then a Torah of Shem V'Ever which quite evidently represents a non-Jewish, universal monotheistic moral tradition. It is challenging to contemplate the thought that Yitzchak would need to study at this institute of universal wisdom. Does this mean that our parochial Judaism does not suffice as a preparation for the outside world? Or maybe along with our Judaism, we need to study other wisdom? Or was Yaakov – on the way to Mesopotamia – seeking to ally himself with local monotheists? Or possibly, in seeking a better preparation to confront the local challenges of Haran, he needed to study with people who had already contemplated and grappled with the local philosophies, and Yaakov needed their guidance.
Much to think about...
Shabbat Shalom