New Ideas for your Pesach Seder 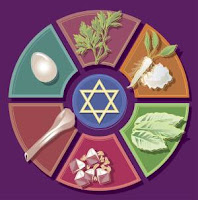 Take a break from the cleaning, and get your mind thinking about Pesach! Here are a bunch of classes that I have written over the years. I am sharing them now so that you may prepare early for Seder Night.

Please feel free to share, and to use as a basis for discussions around your seder table.

The Psychology of Chametz Why is Hametz forbidden on Pesach? What is the philosophy behind the ban on Hametz? We offer 4 possibilities.

Matza and the High-Speed Redemption - Matza must be baked in less than 18 minutes. What is the symbolism of this "fast-food"? Why does the Exodus have to be so quick? We shall discuss what happens in the life of the nation, and in our personal lives, when we make rapid transitions. Are they beneficial or harmful? From Rav Tzadok of Lublin to Rav Kook, from the Exodus to the Ethiopian Aliyah, join our journey.

Earning Redemption! Did Israel "Earn" or deserve to be redeemed from Egypt? Were the Jews assimilated or strong in their Jewish Identity? How does this impact contemporary questions of Galut (Exile) and Geula (Redemption)?

Arami Oved Avi: Peshat and Drash Arami Oved Avi (צא ולמד) suggests that Lavan wanted to kill Yaakov. We shall study this text in peshat and d'rash to reveal a new understanding of the Haggadah.

The Maror in the Matza


The Haggadah: Past, Present and Future When we sit at our Seder, are we reliving the past, or should we be concentrating on how the past enlightens our future?

The Ten Plagues: דצ"ך עד"ש באח"ב Why are the Plagues grouped into a strange mnemonic? Why did God need to bring so many plagues? Could he not have inflicted Egypt with a single mega-Plague?

Test of the Exodus: Blood on the Doorposts Why did the Jews need to smear blood on their doorposts? Was it something magical?

Email ThisBlogThis!Share to TwitterShare to FacebookShare to Pinterest
Labels: Chagim

This week's parashat Hashavua introduces us to the chief artisan of the Mishkan (Tabernacle) – Bezalel - who designed and crafted all the Temple artifacts.

In 1906, a visionary named Boris Shatz founded the first art institute of the new Yishuv, in Jerusalem. Called Bezalel, it was the first educational academy in which the language of instruction was Hebrew. Shatz perceived of Bezalel as a center for the birth of a new Hebraic art, a powerhouse of spiritual energy that would radiate its ideals to the entire Jewish people and inspire a renewed national identity.

Rav Kook wrote a beautiful letter to the founders of Bezalel in which he expressed his feeling that this school signified a paradigm shift on the national situation; it was a sign of Israel's national reawakening:

"The dear and beautiful girl, after a long illness, with her face pallid, bluish lips, burning fever and convulsions … behold, she opens her eyes and her tightly sealed lips, her little hands move with renewed life … seeking their purpose. Her lips move, almost returned to their normal color, and a voice is heard, as if from the dead: "Mother, Mother; the doll! Give me the doll! The dear doll which I have not seen for so long!" A voice of joy and a voice of gladness, all are delighted, the father, the mother, brothers and sisters… "Little Shoshana is asking for the doll!" Thank God, a sign for the good… "Hurray! little Shoshana, so beautiful and sweet, has asked for her doll."

Rav Kook depicts the national interest in aesthetics as a demonstration of a Jewish return to health and vitality. He offers a powerful story of a child who has experienced life-threatening illness which have brought her to a feverish lifeless situation. All are concerned for her well-being. But then, she regains some color, she begins to move. She has thankfully, turned a corner, her illness is receding. Suddenly, she asks for her favorite toy; her doll. Everyone responds with sheer delight as this is the most obvious indication of recovery, of a return to her real self; the child is on the road to a full recovery. Now, Rav Kook names his imaginary child Shoshana, and as such she is a metaphor for our nation, which is sometimes also named "Shoshana" (Shir Hashirim 2:1). For Rav Kook, the renewed interest in artistic expression reflects a return to health for the nation, to normal national living, a national recovery:

Jerusalem, the beloved, this lily of the vales (shoshanat ha'makim), this dear daughter of Zion, this precious daughter is afflicted with the bitter disease of the Exile, prolonged and stormy … Many of the weak-hearted have lost hope for her life. Now a life-giving stream has gently shaken the sick depressed bones, and she demands beauty and works of art. Practical men will say that perhaps this is not the proper moment that there are priorities and more essential needs. Yes, perhaps, there are needs, but this request from [Jerusalem's] children's heart, from the spirit that she bestowed on them, is itself a sign of life, a sign of hope for salvation and comfort.

Rav Kook identified the arts as indicative of Israel returning to health, to itself.  Admittedly, for him it was only the "doll." Important nation building activities: immigration, agriculture, infrastructure, military, government, judiciary, Torah were clearly a more significant and vital objective if we were to rebuild our nation in its country. But nonetheless, that doll - the arts - retain their status as a manifestation of life. After all, every nation also has song, theatre, music, poetry, dance, handicrafts.

And I would argue that this is not merely true at the national level but also on the personal level. To be a healthy individual, we all have artistic needs. People need to connect, to express ourselves in a whole range of expressive and creative avenues in order to be healthy, feeling, thinking, balanced, individuals.

These areas of expression are not peripheral to the "serious" aspects of our national and personal life. They are frequently as basic and essential as the air we breath and the ground upon which we walk because they are the truest expressions of life – of our spirit, our emotions and feelings, of our "divine image" which allows us to be creative, energized, to explore, critique, to build, to change, to grow, to feel, to love, to mourn, celebrate, laugh and cry.

I say all this as my community, the religious-Zionist community, has developed in this regard quite dramatically in the past twenty years. From a sector which was rather bland, emotionally closed, defensive and and monolithic a generation ago, we now have an entire range of institutions: Maaleh – film school, Mashiv Haruach – poetry; Emunah – art school ; Orot – dance, and all sorts of expressions of music, arts, and so forth. High schools all have art, dance, drama and film options, for boys and for girls. People can use the right hemisphere of the brain and engage in their non-analytical side.There is room for exploration and expression.

Moreover, many of the products of these institutions engage in some very Jewish and Israeli soul-searching in their artistic output. In other words, their art or dance is not merely imitating what they see in the secular world. It is coming from a genuine internal place in which art fuses with faith and religion, engaging in a special conversation. This is just one dimension in which the Modern-Orthodox space in Israel is hugely exciting in that young (and old) people have such breadth, so many avenues of expression and exploration, so many opportunities for interplay and fusion between so many options in the religious and national rainbow.[This is not happening in the Haredi community as they generally stifle expressive arts of this sort. In the secular world which is highly artistic, art will connect with the individual, or the national, but less the sources of religion and its deep spiritual manifestations, as religion is not the life they lead. Of course many artists who are engaged in religion, do embody this fusion: Ehud Banai, Etti Ankri, Bari Sacharov, Evyatar Banai, Shuli Rand, Kobi Oz, and others ... this si also a new and exciting wave of Jewish creativity]

But beyond direct relationship to religion, when 20,000 people fill the street to exercise, many of them for charity, all of them to enhance their health, in a carnival which spans all of Jerusalem, that is a unique sense of public culture, peoplehood, sport, body, people and soul. The Jewish people are alive. One of my running friends, who ran the 10k with all her kids, put it this way: I love watching all those Jews running - and they're not running away from no Egyptians or Cossacks ...  pretty historic. For me, its a Zionist moment on steroids."

I constantly walk around the streets here staring at the billboards that announce cultural events , just marveling at the revival in our nation, the remarkable power of artistic expression, the amazing honest self reflection that we witness in our movies, writers and poets, the depth of Judaism that is reflected in so much theatre, photography, writing.

And I feel privileged to be part of my living and breathing nation, alive, and running through Jerusalem's streets.