I found these cool designs here. They mix a good sense of humour with some Torah.

or this for Rosh Hashanna (representing the sounds of the Shofar!)

This one is a little subversive: [The phrase from Pirkei Avot, "Be moderate in judgment" alongside the 4 categories of death-penalty according to Halakha.]

And in preparation for Yom Kippur - for those with a gory sense of humour - here is the "Avoda" T-shirt:

What can we do for Gilad Shalit? 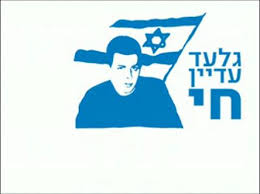 We spent Shabbat this week in Yerushalayim. I davened early and spent most of Shabbat morning in the park with my youngest. But at a certain point, we'd had enough of the park, and I suggested that we visit the Shalit family and wish them a Shabbat Shalom at the protest tent for Gilad that has been set up outside the PM residence . (Ever since the march from their home to Jerusalem, some 6 weeks ago, the Shalits have been living in a protest tent just 50 yards from the PM's official residence, and are promising to stay there until Gilad returns home.)

So my 6 year-old and I went to pay the Shalits a visit. It is quite startling to walk up to the tent and to be greeted by Noam Shalit, his face so familiar that you cannot quite believe that it is really him. And we chatted with him about the campaign, and how he is managing with their arduous vigil, and then we wished him well, and a Shabbat Shalom.

I asked Noam Shalit how we might be able to help, and he didn't really have much to say, other than "support us."

The sense of helplessness is palpable. I left asking myself the question; What have I done for Gilad Shalit? And, can I do more?

On the one hand, I am not a supporter of releasing one thousand terrorists for Gilad shalit, and despite the question, "If it were your son..." I do believe that a mass release of Hamas men would be a mistake.

My sister and brother-in-law say a tefilla for Gilad Shalit at Havdalla every week, bringing the prayers for his release into their home. I have had Gilad Shalit regularly in my tefillot, but maybe I can do more in that direction.

And I was just wondering whether we could get 1 million Shanna Tovah cards to Gilad Shalit delivered the the Director-General of the U.N. demanding that they be delivered to Gilad for Rosh Hahanna. Maybe some would be passed along? Who knows whether that might make some impression? Could we get something like that off the ground in the next 3 weeks? What do you think?
UPDATE
All addresses (and a card to download) may be found at a FB group I set up - here
You can send cards onling here at http://giladgreetings.org/
Jpost piece here
Posted by Alex Israel at 12:46 am 5 comments

The Gilo Wall comes down. Security vs. Exposure

Today, the Gilo Wall is being taken down (link, link.) What is this wall and when was it built?

Well, in the scary days of the second intifada (2000-2001), there was daily shooting from Beit Jala (on the outskirts of Bethelehem) towards the Jerusalem neighbourhood of Gilo. Snipers fired into apartments of regular citizen, and made life unbearable for the people living in the southern edge of the city. And so, to give some level of protection at street level, Tzahal put up some ugly concrete blocks to give at least some degree of protection. That was a period in which I travelled the roads to Gush Etzion daily wearing a bullet-proof vest. It was a time when you felt that driving along the "tunnel road" from Jerusalem to Gush Etzion had a certain dimension of gambling with your life.


Of course, artists came along to paint on the wall, each with their own idea of the relief that their art might provide for the people of Gilo (see this video)

And now, a return to normalcy has been declared. The army feel that the wall is unecessary, the immediacy of the threat is absent, and the wall can be dismantled. So what can we say about this situation?
1. That whereas there is a intense pressure for political settlements and Peace agreements, sometimes, away from the politics, the facts on the ground demonstrate a very concrete sense of improvement, calm and co-existence. (More about this in my upcoming post)


2. Second, it is interesting to hear the statements by residents of Gilo as to their fear of exposure now that wall has been dismantled. We set up barriers and protections when we are in crisis, and then when life returns to normal, we feel exposed and unprotected without them. We forget about the ugliness of the wall, the price we pay for the loss of the beautiful scenery, the artificial scar upon the landscape.


I think this is true in many areas of life (including politics, religion.) We build mechanisms that respond to a problem. But we forget that when the problem is less acute, that we can dispose of those protections. Sometimes they give us a sense of security. At times, it is simply a fear of exposure that prevents a respone to normalcy. I am glad that the Jerusalem Municipality and Tzahal had the courage to engage in this positive change.