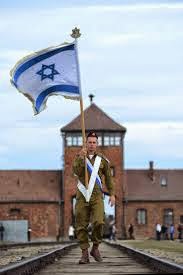 Yesterday's post challenged the philosophy that the answer to the Holocaust is mere survival and Jewish strength. I challenged a narrative that sees Medinat Yisrael as the answer to the Holocaust merely because it protects the Jewish people. I argued that the heroism of the Shoah is richer than endurance and defiance and that the response to the Shoah should be wider than mere survival, but should focus upon building a new society, rebuilding Judaism, forging a positive Jewish mission.

I challenged this philosophy on several accounts yesterday, and yet today, I would like to give the other side of the coin.

Every time I watch the state ceremony at Yad Vashem - with the Israeli soldiers standing to attention, the president and the prime minister, the diplomatic corps in attendance - I am struck by the dignity and pride that the State of Israel gives us as a nation. Each time, I ask myself, how would the Jewish people have managed to salvage itself after the Holocaust without Medinat Yisrael? After the Holocaust the despair, the depression and hopelessness would have been too crushing to inspire Jews to retain their future. But the establishment of Israel just 3 years later lifted the Jewish people, raised our pride and dignity.

The shamefulness of persecution and exile is intense. In my post yesterday, I mentioned Titus' Arch. I stood in Rome last year looking at the huge edifice of Titus' arch and I was struck by a mix of disbelief and humiliation. Why disbelief? Because the gateway to ancient Rome was Titus' arch, built to celebrate the downfall of Jerusalem. Every person that entered the city saw it, passed under it, and that is the image that endures in Rome to this day; that and the Coloseum, which as every tour guide says, was built by Titus with the money ransacked from Jerusalem in 70 CE and built by Jewish slave labor (80,000 slaves!). Disbelief because anti-semitism is so inexplicable, so perplexing. Why should the great Roman empire with its global aspirations care about the ancient Judeans, the Jews? and how is it that this monument to our Temple still stands as a testimony to the most irrational hatred?

And humiliation. Because look! Here is testimony to our exile, our national calamity, our Hurban! I thought to myself, I would have to stand here and "cut keriya" (tear my clothes in a sign of mourning) were it not for Medinat Yisrael and our national revival. To see our Hurban on public display, our slavery and destruction in the centre stage of the city which is widely viewed as the crucible of government, to see our disgrace paraded in full view - that is the epitome of national disgrace and dishonour.

With Medinat Yisrael, the pendulum of history has (thank God) swung in the opposite direction. Rav Soloveitchik put it well in Kol Dodi Dofek:


... for the first time in the history of our exile, divine providence has surprised our enemies with the sensational discovery that Jewish blood is not free for the taking; it is not hefker!”

Yes! Israel will stand up for and protect Jews all over the world; you cannot murder a Jew and expect to get away with it! Now there is an address, a source of dignity and pride. And furthermore, with the establishment of the State of Israel we end our ceaseless wandering; we have Israel as a homeland:


"...the gates of the land were opened. A Jew who flees from a hostile country now knows that he can find a secure refuge in the land of his ancestors…Now that the era of divine self-concealment (hester panim) is over, Jews who have been uprooted from their homes can find lodging in the Holy Land"

On Yom Hashoah I thank God that we have the protection and pride of the State of Israel. No - this is not all. As I said yesterday, Judaism is not just about mere persistence; but without survival and hope, we have nothing.

We have experienced the prophecy of Ezekiel's dry bones in the most literal way, and we have much for which to thank God and the visionaries and leaders of our modern State of Israel:

1 The LORD carried me and set me down in the midst of the valley, and it was full of bones ... 3 And He said unto me: 'Son of man, can these bones live?' And I answered: 'O Lord GOD, You know.' 4 Then He said to me: …. 5. Behold, I will cause breath to enter into you, and you shall live. 6 And I will lay sinews upon you, and will bring up flesh upon you, and cover you with skin, and put breath in you, and you shall live….11 Then He said to me: 'Son of man, these bones are the whole house of Israel; behold, they say: Our bones are dried up, and our hope is lost (avda tikvateinu); we are clean cut off. 12 Therefore prophesy, and say unto them: Thus says the Lord: Behold, I will open your graves, and cause you to come up out of your graves, my people; and I will bring you into the land of Israel. …. And I will put My spirit in you, and ye shall live… (ch.37)

They say, the world said only 70 years ago: "our hope is lost - avda tikvateinu!" But the State of Israel gave the strongest refutation of that - "Od lo avda tikvateinu" - our hope is NOT lost. Yad Vashem is like a dark tunnel, but when we emerge we find ourselves in rebuilt Jerusalem. We realise that our mission is to build our country, our society, or future in our own sweet land.